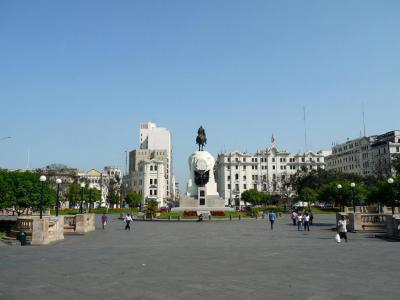 If you are fascinated with history and have a passion for historic places, then Plaza Bolivar in Lima is the right place for you. Previously known as Plaza de la Inquisición (Square of the Inquisition) and Plaza del Congreso (Congress Square), Plaza Bolivar is found in the downtown part of Lima, known as Barrios Altos. It lies two blocks away from Abancay Avenue and three blocks east of Plaza Mayor.

Presiding over the square is the Legislative Palace - the seat of the Peruvian Congress, - formerly the Inquisition Tribunal (Spanish: Tribunal del Santo Oficio). It is from here that the infamous Inquisition Tribunal operated up until 1813, under the reign of viceroys. Standing nearby is the Congreso de la República.

In 1859, the square assumed the name of Plaza Bolívar and had a replica of the Simón Bolívar monument, the original of which stands in Caracas, Bolivia, installed in the middle. Simon Bolivar played a key role in the history of South America, and is largely responsible for the liberation of five South American nations. Bolivar went down in history as a person of spirit, endurance, sacrifice and tremendous compassion for his fellow countrymen. Plaza Bolivar commemorates the great freedom fighter whose native country was Venezuela.

During the national holidays, Plaza Bolivar becomes the site of public gatherings and military parades. For the rest of the year, despite its historical and political significance, the square remains rather quiet and ideal a place for mental and physical relaxation under the lush canopy of the old trees.
Image by vcheregati on Flickr under Creative Commons License.