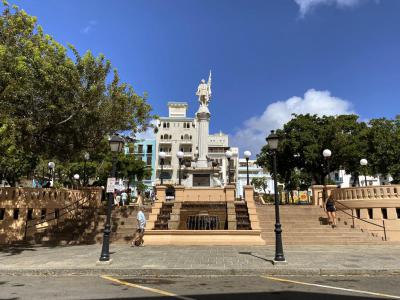 Columbus Square is one of the most important squares in San Juan. Originally known as Santiago Square, back in the 17th century this square literally marked the doorstep to the old town. Encircled by stone walls in 1635-1641, the only way into the city was then through five gates, the centermost of which was Puerta de Santiago (the Land Gate), straddling the sole highway linking the walled San Juan islet to the rest of Puerto Rico by land.

By 1772 the open space adjacent to Puerta de Santiago had taken the shape of Santiago Square, albeit still unpaved at that time and long afterwards. From 1862, several projects had been undertaken to refurbish the square until in 1870 it finally started to take its current shape. In 1893 the statue of Christopher Columbus was installed to commemorate the 400th anniversary of the discovery of Puerto Rico, upon which the square was renamed Colón, or Columbus Square.

To the south of the square is a gem of Puerto Rican entertainment culture, the Theater Tapia. Inaugurated in 1824, this lovely piece of neoclassical architecture was initially known as the San Juan Municipal Theater. Over the years, many notable performers have graced its stage. Outside the theater, along Fortaleza Street, there are a number of quaint restaurants and cute little cafes where one can sip some iced coffee outside whilst enjoying the sight of Columbus Square, the symbol of progress and testament of new and old San Juan!
Image by Steam Pipe Trunk Distribution Venue on Flickr under Creative Commons License.