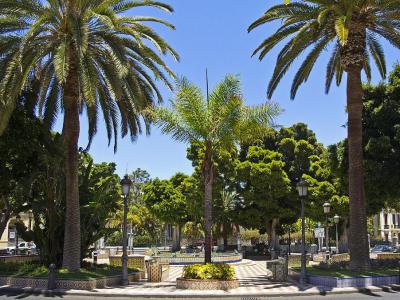 Square of 25 of Julio is the round area located on the avenue bearing the same name. July 25, 1797 was the day on which the city succeeded to hold off Nelson’s attack. The site is also known as Plaza de los Patos, with more than 1,330 square meters developed in 1917. It features the colourful mosaic surface and elements. There is a round pool in the center of the plaza and the replica of the fountain in Maria Luisa's Park of Seville with frogs, turtles, and a goose. Among the trees in the square, there are some Indian laurels and palms.
Image by Koppchen on Wikimedia under Creative Commons License.