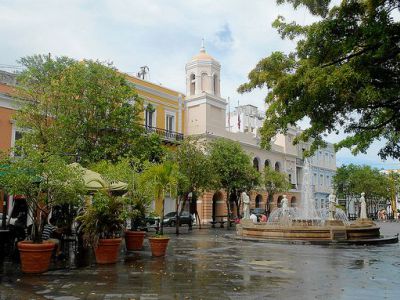 Arms Square is one of the main squares in San Juan. Over the years, it has changed several names relative to the functions it served. Initially, in 1521, it was called Vegetables Square. Then, during the 17th-19th centuries, it was known as Arms Square, for being the ground for military exercises. Then, by the early 20th century, it was back to Vegetables Square again, and used as a market. Nowadays it is known as Arms Square again.

Arms Square is the city’s de-facto central square, modeled on the classic squares of Madrid and Mexico. Although the square had factually existed for centuries, it was not until 1840 that the city council approved its proper construction, which commenced in 1851. It was then that the four statues made of bronze and oil-coated to simulate marble, representing the Commerce, Industry, Science and the Arts, arrived here. In fact, there were a total of eight statues to be installed, but the other four were lost. In 1872 the original statues were removed and the new marble ones, representing the Four Seasons, put in their place in the four corners of the square.

In 1955 two circular fountains and two lampposts in the center were added. The four statues were then configured in a circular fountain in front of the Palacio de la Real Intendencia on the western side, which houses the Department of State of Puerto Rico.

A highlight on the northern side is the Spanish colonial style Casa Alcaldía – home of San Juan City Hall – built in 1789, with twin turrets resembling those of a sister building in Madrid. A tinkling fountain, seating, shade trees, and a couple of old-school coffee booths make this a good spot for a sightseeing break.

Why You Should Visit:
An important social gathering spot, used for generations, and a popular tourist attraction.

Tip:
This laid-back space is loved by the locals to buy snacks, watch shows, play dominoes, and chat with friends. Take a seat on a bench to give your feet a break and soak up some of the everyday comings and goings. You can also buy your kids some traditional treats like sesame-seed lollipops or coconut candies.
Image by Roger W on Flickr under Creative Commons License.