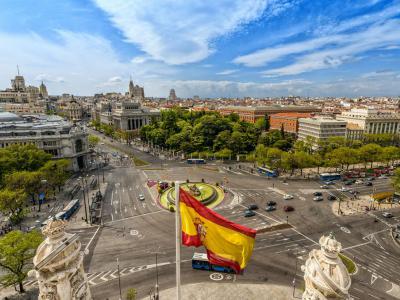 Plaza de Cibeles is a square with a neo-classical complex of marble sculptures and fountains that has become an iconic symbol of Madrid. The fountain of Cibeles found in Paseo de Recoletos, a wide boulevard leading from Plaza de Cibeles to Plaza de Colón, depicts Cibeles (Cybele), the Phrygian goddess of fertility, sitting in a chariot pulled by two lions. The fountain was built during the reign of Charles III, and designed by Ventura Rodríguez between 1777 and 1782.

Up until the 19th century, both the fountain of Neptune and Cibeles looked directly at each other, until the city council decided to turn them around to face towards the city center. The fountain of Cibeles has been adopted by the football club Real Madrid as the place for celebrating their triumphs in major tournaments, such as the Champions League, La Liga or Spanish Copa del Rey.

Why You Should Visit:
Located in the center of Madrid, at the crossing of the city's main arteries, the fountain (Fuente de Cibeles) and the 'CentroCentro' building are unrivaled in beauty, especially when the plaza is lit at night.

Tip:
Busy intersection – not really the best place for pedestrians.
Image by Brian Snelson on Wikimedia under Creative Commons License.
Sight description based on wikipedia