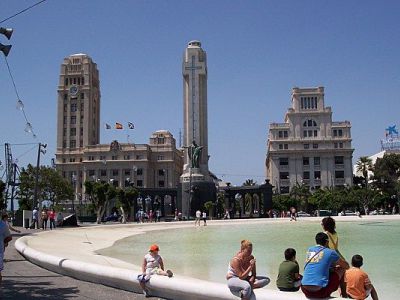 On July 25, 1797, British Rear Admiral Horatio Nelson lost his right arm to a musket ball fired from the Tiger Cannon of the Castle of San Cristobal in the Battle of Santa Cruz de Tenerife. The Admiral had attempted an amphibious landing to take the town. He lost the battle and his arm.

The Spain Square was laid down over the Castle of San Cristobal in 1929. Remains of the castle walls are on display in a tunnel under the square. The notorious Tiger Cannon is also there, looking fine after all these years. The square is located in the center of town. It is one of the main squares of the island of Tenerife.

The square is the work of architects Jacques Herzog and Pierre de Meuron of Herzog & Meuron of Switzerland. The Plaza has a lake and a fountain. Around the square is the Insular Palace of Tenerife, the Palace of the Charter and the Candelaria Square. The Monument to the Fallen of the Spanish Civil War is in the center of the square.

A sign, reading "Santa Cruz" (short for the slogan "Sant Cruz, the heart of Tenerife") is at one end of the square. The last letter of the word "Santa" is in the form of two hearts, one green, one blue. A sculpture "I AM Fine (Lo Llevo bien)" by Basque artist Julio Nieto is next to the lake. It is a man in the shape of a tree, a symbol of optimism.
Image by Enrique Castrillo Núñez on Wikimedia under Creative Commons License.