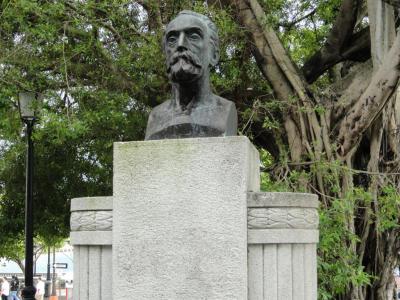 Plaza de Hostos is a small landscaped square located near Casa Blanca, just in front of Plaza Dársena. Dedicated in 1998, the square commemorates the famous Puerto Rican educator, philosopher, intellectual, lawyer, sociologist and independence advocate Eugenio María de Hostos, aka “The Citizen of the Americas”, whose beautiful statue, featuring de Hostos in the company of joyful kids, created by José Buscaglia, stands in the center of the square, watching over the cruise ships entering and leaving the San Juan Bay.

Other than this, guests will find here lots of arts and crafts, as well as traditional piña coladas (a must try!) and other locally-made deserts sold from kiosks dotting the area. A nice place to stop after exploring the southern district of San Juan!
Image by Daderot on Wikimedia under Creative Commons License.