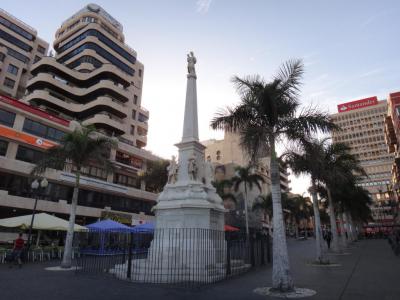 Forty days after Christmas is the celebration of the Candelaria. This is the day when Mary, mother of Jesus, presented her infant son in the temple for the first time. In the Canary Islands Candelaria is also observed on August 15th, the day of the Assumption. Before the Spanish conquest, August 15th was the harvest feast of the indigenous people.

The Candelaria Square is located next to the Spain Square. Featured in the square is the monument, Triumph of Candelaria. It is in the form of an obelisk of white marble sculpted by the artist, Pasquale Bocciardo, in 1768.

Originally the obelisk was 36 feet high, mounted on a square base. Currently it is 13 feet tall. Four marble statues of indigenous Guanche people are at the base venerating the image of Mary atop the obelisk. In May the "Feast of May" is held in the square memorializing the founding of the city.
Image by karel291 on Wikimedia under Creative Commons License.