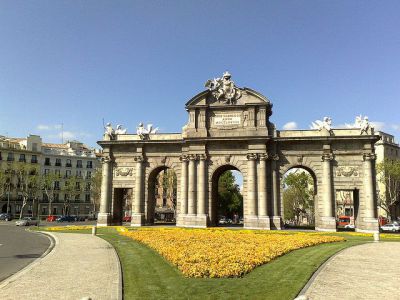 The Plaza de la Independencia (Independence Square) is a central square in the Spanish capital Madrid. It sits at the intersection of Calle de Alcala, Calle de Alfonso XII, Calle de Serrano, Calle de Salustiano Olozaga and the Paseo de Mexico that runs entirely in the Buen Retiro Park. Being centred with the 18th-century gate of Puerta de Alcala, the Plaza de la Independencia is among the important symbols of the city of Madrid. The square was opened in 1778 during the reign of King Carlos III. It was designed by architect Francesco Sabatini. However, the current shape of the square dates back to 1869. It is mainly surrounded with buildings from the late nineteenth and early twentieth centuries, built during the expansion of the city of Madrid. The square has a neo-classical style, with majestic details and is considered to be one of the most iconic landmarks of Madrid. Best viewed at night.
Image by rp72 on Flickr under Creative Commons License.
Sight description based on wikipedia