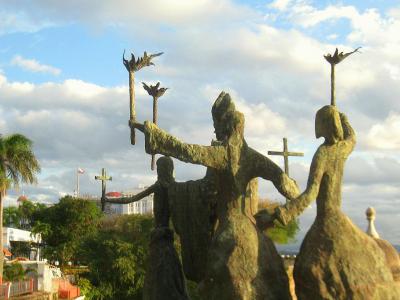 Plaza La Rogativa is the most scenic square in San Juan, offering a 180-degree views of the San Juan Bay. From here, you can also get a clear view of the San Juan Gate and La Fortaleza, much as of the El Yunque national forest in a distance.

The name "Rogativa" means "Procession". According to a legend, during the 1797 attack by the British army, the governor of San Juan ordered a "rogativa" by a group of women, led by the bishop, to march through the city streets at night. Started from the San Juan Cathedral, the procession carried torches and crosses, while singing hymns along the way. The British mistook these sights and sounds for the arrival of Spanish Army reinforcement and gave up the attack. Commemorating that event are the four bronze statues in the center of the square.

Due to its historic significance and scenic beauty, Plaza La Rogativa is also popular a spot for wedding ceremonies. If nothing else, come here in late afternoon to watch the sunset over the San Juan Bay.
Image by Daderot under Creative Commons License.