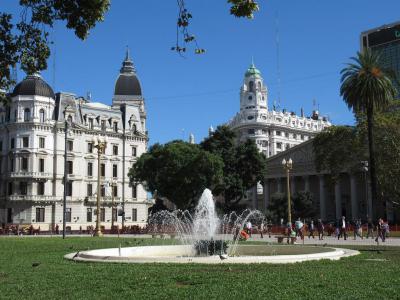 Plaza de Mayo is the oldest plaza in Buenos Aires. Its history began in 1580 when Juan de Garay founded Buenos Aires. The current plaza was laid out in 1884 and named to commemorate the May Revolution of 1810 that overthrew Spanish rule.

Several historically and architecturally interesting buildings line the plaza. The original Cabildo, or town council building, was built in 1608. The current white colonial-style building was completed in 1751 and has undergone several renovations. The Cabildo is the only colonial-era government building still standing n the Plaza de Mayo.

Today, the Cabildo operates as the National Museum of the Cabildo and the May Revolution. Here, you will find colonial paintings and furniture. The views from the upper levels are wonderful. Don't miss the changing of the guard, every hour, in front of the Cabildo.

The 1914 City Hall was built in Second-Empire style and faces the plaza. The Metropolitan Cathedral of Buenos Aires is also located in the plaza.

As the oldest plaza in Buenos Aires, Plaza de Mayo has witnessed all the important events in Argentine history. Today, locals and tourists alike meet friends and eat lunch in the plaza.

Don't miss the changing of the guard, every hour, in front of the Cabildo.
Image Courtesy of Wikimedia and Felipe Restrepo Acosta.