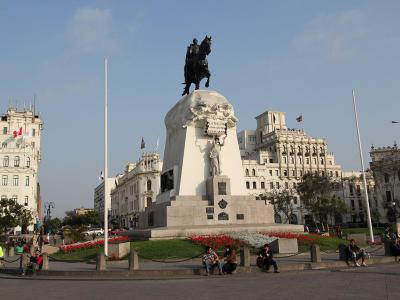 A very emotional place for many South Americans, and quite understandably so, the San Martín Square commemorates General José Francisco de San Martín who was the principal architect of the liberation of South American territories from Spanish control. The square was inaugurated in 1921 on the centenary of the declaration of independence of Peru in 1821. Placed in the center of the square is a mounted monument to General San Martín which was created by Catalan sculptor Mariano Benlliure.

The spacious square has recently undergone a renovation. Flanking it are several historic buildings, such as Club Nacional, a popular gathering place for the local elite, and Teatro Colón, one of the city's first theaters, built in 1914. Prior to the outset of the new millennium, the square had also been the home of the erstwhile elegant Hotel Bolivar.

The majority of the ancient buildings in the square bear similar Neocolonial and Baroque features which appear symmetrical and quite pleasing to the eye. In addition to its architectural splendor, Plaza San Martin is also known as a bustling and vibrant venue that lures tourists with a multitude of shops and restaurants located nearby. On rare occasions, the square becomes a site of political demonstrations.

Why You Should Visit:
One of the largest and most impressive squares in Lima, showing a great expression of French architecture.
Unlike the colonial architecture of Plaza de Armas, this plaza was built in the 1920s with all of the buildings faced in white stonework.

Tip:
Be sure to look at the beautiful interiors of the Gran Hotel Bolivar which dominates one side of the plaza with its beautiful dome.
If you have a friend, try to get invited at least for a drink in the Club Nacional; it's THE private club in Lima and women still can't go in unescorted.
Image by comicpie on Flickr under Creative Commons License.