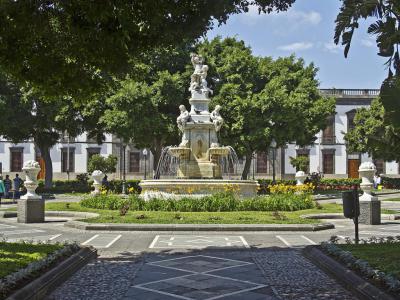 Spanish General Valeriano Weyler, Captain General of the Canary Islands, had experience in building buildings before he ordered the construction of the Palace of the Captaincy General in Santa Cruz de Tenerife. He had been Captain General of Cuba during the Cuban War of Independence.

Clearly, Valeriano Weyler was a man who could get things done. Weyler Square was built in 1893 by Vincente Armino. The square has an area of 3600 square meters and it connects to the Castillo Street, an important commercial avenue. The square originally was intended to be a forecourt to the neoclassical Captaincy General. It was provided with a circular, simple fountain in 1883, which was replaced by a new fountain in 1899.

The replacement fountain is luxurious and it was expensive. More than 11,000 lire was raised through donations, raffles, dances and bazaars. They even had to sell the lumber taken from the soldiers' temporary barracks.

The finished monumental fountain, made by Achille Canessa of Genoa, is of Carrera marble. A bit neo-Renaissance, it is in two sections, a central pillar and a basin. Atop the pillar are children holding flowers. On each of the four corners of the square base is a child holding a dolphin spewing water which falls into shells in the wide basin.
Image by Koppchen on Wikimedia under Creative Commons License.