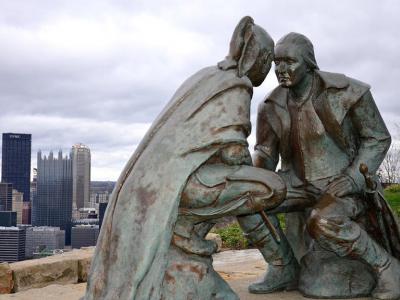 The park is named for a landmark 2006 public sculpture in bronze, Point of View. The piece depicts George Washington and the Seneca leader Guyasuta, with their weapons down, in a face-to-face meeting in October 1770, when the two men met while Washington was in the area examining land for future settlement along the Ohio River.

Before the dedication of the park in October 2006, it had been known by locals as "Photography Park" because of its popularity with tourists who perched on the concrete overlook taking pictures of the cityscape below.
Image Courtesy of Wikimedia and Raman Patel.
Sight description based on Wikipedia.

Want to visit this sight? Check out these Self-Guided Walking Tours in Pittsburgh. Alternatively, you can download the mobile app "GPSmyCity: Walks in 1K+ Cities" from iTunes App Store or Google Play. The app turns your mobile device to a personal tour guide and it works offline, so no data plan is needed when traveling abroad.