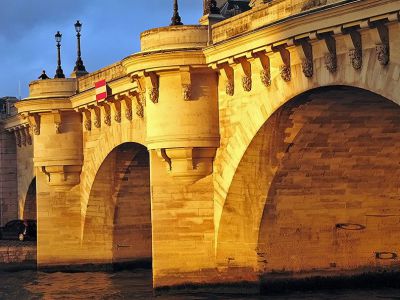 The Pont-Neuf (or the New bridge) in Paris has been around since the late Middle Ages. Although the name claims that it's new, it is, in fact, the oldest standing river crossing in Paris. Despite the age, or perhaps because of it, the bridge is just as popular today as it was back in the 1600s when it first opened and is undoubtedly the most famous of all the bridges spanning the river Seine. In reality, the word “new” was to distinguish it from the other, older bridges standing at the time and traditionally lined with houses on both sides. The novelty of this New Bridge was that it was the first one built without houses along it, thus allowing to observe, from the river, the unobstructed panorama of Paris in all its clarity complete with the boats passing underneath. Centuries on, this panorama has expanded with the arrival of new landmarks, such as the Eiffel Tower, complementing the long-standing ones like the Notre-Dame Cathedral on Île de la Cité.

Another distinguishable feature of the Pont-Neuf is the semicircular bastions jutting out above the piers. These were made to allow people to step aside so as not to get wet or soiled in mud by the passing carriages. Later on, they were used as meeting places and, at one point, even served as trading spots for the street vendors and even tooth-pullers. Now that the traders are gone, these bastions are occupied primarily by tourists and romantic couples.

Also noticeable about the Pont-Neuf is the presence of mascarons, the stone masks in high relief, some 300 of them on the outside edges of the bridge, close to the cornice. If you look closer, you will notice that each mascaron is different and has a distinct and somewhat unusual expression; seems like they're grimacing or something...

Why You Should Visit:
If you're the kind of person who likes watching boats – this is a great spot.
Otherwise, some fantastic views of old Paris from either side!

Tip:
For those keen on bridges and wishing to see the Pont-Neuf from a totally different angle, there is a River Seine cruise company called “Vedettes du Pont-Neuf” whose office is right next to the bridge. Their river cruise is a really good value for money, and you can pick up their discount voucher from the majority of tourist information offices around Paris. Highly recommended!
Image by Steve on Wikimedia under Creative Commons License.