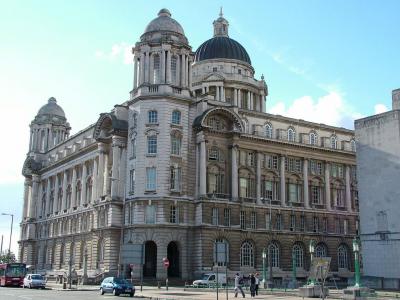 Like its neighbour, the Liver Building, the Port of Liverpool edifice overlooks the mouth of the Mersey River in the historic city docks district of Liverpool. It forms part of the UNESCO World Heritage Site which commemorates the historical importance of the city to the Merchant Navy. This building was designed in the early 20th century in Edwardian Baroque style, emphasizing the importance of Liverpool to the British Empire.

Throughout the building, there are numerous references to the sea and the maritime operations of both Liverpool and the British Empire. The main entrance gates are decorated with a globe supported by dolphins, while the cast iron gates and gate piers are decorated with mermaids, shells and anchors, and have shields with the initials "M.D. & H.B.". The outside light fittings are designed such that the lights themselves appear to be held in the hands of the Roman God Neptune. Similarly, the lifts are also decorated with maritime references, in the form of gilded emblems representing the globe, seahorses and anchors. In the central hall, the frieze between the ground and first floor is adorned with the words of Psalm 107: "They that go down to the sea in ships that do business in great waters these see the works of the Lord and His wonders in the deep. Anno Domini MCMVII".

Why You Should Visit:
To marvel at an architectural gem reflecting the designs of the British Empire, rich in history and with many beautiful and distinctive features: façade with a large central portal beneath Baroque columns and a pediment; iconic copper dome rising from the center with a spire reaching 220 feet (67 meters) in height and twin towers on the corners; plus 10-foot (3-meter) statues of women on either side of the main entrance representing Commerce and Industry.
Cross the River Mersey and enjoy the view of the enormous white building from a distance.
The Port of Liverpool Building has had its fair share of Hollywood screen time being used as a film set in several productions, including The Adventures of Sherlock Holmes & Foyles War (TV series).

Tip:
You can step inside the lobby, but that's about it. Otherwise, take some photos.
Image Courtesy of Wikimedia and MrHope.
Sight description based on Wikipedia.