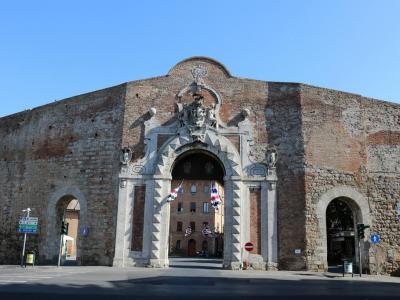 The Camollia Gate is one of the earliest gateways constructed along the walls that guarded northern front of the city of Siena.

The Camollia Gate dates back to the 7th century. According to legend, Romulus, one of the founders of Rome, sent his commander, Camulio to the north of Italy to capture his rebellious nephews, Aschio and Senio. Camulio and his men camped at the site where the gate was later erected, hence the name of the gate.

The Camollia Gate served as the entrance for pilgrims visiting the city from other parts of Italy in medieval times. It was heavily guarded because of its location on a road called Cassia Way, that led to the city of Florence. The original gate, built in the 13th century, was completely destroyed during the Siege of Siena in 1555.

The current Camollia Gate structure dates back to 1604. It was designed by Alessandro Casolani. The sculptures that adorn the gate are by Domenico Cafaggi. The exterior arch has a sculpture recording the entrance of the Spanish King Ferdinand I into the city after the Spanish conquest.
Image by Mongolo1984 on Wikimedia under Creative Commons License.