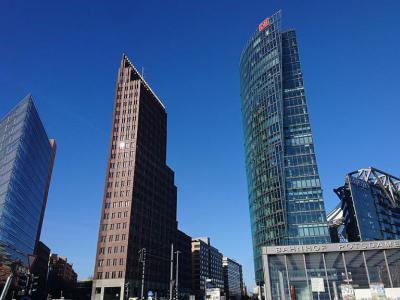 An important public square and traffic intersection in the centre of Berlin, Potsdamer Platz lies about 1 km (1,100 yd) south of the Brandenburg Gate and the Reichstag (German Parliament Building), and close to the southeast corner of the Tiergarten park. After developing within the space of little over a century from an intersection of rural thoroughfares into the most bustling traffic intersection in Europe, it was totally destroyed during WWII and then left desolate during the Cold War era when the Berlin Wall bisected its former location. Since German reunification, Potsdamer Platz has been the site of major redevelopment projects, so much so that it now hosts exciting commerce venues, art collections, theaters, gastronomy, festivals, an extraordinary number of architectural styles, and great areas to chill and hang out with friends.

The square is dominated by the ultra-modern Sony Centre (worth visiting for its three floors of tech), it's tent-like roof inspired by Japan's mount Fuji forms the backdrop for many film premieres at the Filmhaus Museum. Other highlights include the Panoramapunkt affording one of the best views of Berlin from above; a replica of the first-ever (1924) semi-automated traffic light tower in Europe; the 'Boulevard des stars', Berlin's version of Hollywood's famous Walk of Fame; a small section of the Berlin Wall; amazing public art pieces around Marlene Dietrich Platz and beyond; the 2 Michelin-starred restaurant FACIL, serving gorgeous modern and creative cuisine, and numerous exciting events and festivals held throughout the year, like the Chinese New Year, Summer Movie Sessions, Festival of Lights and one of Berlin’s most visited Christmas Markets.

Tip:
Before you visit Potsdamer Platz, make sure you see photos of it after WWII – it was, basically, a pile of rubble with only the traffic tower still standing after Allied bombings.
Image by Seeott on Wikimedia under Creative Commons License.