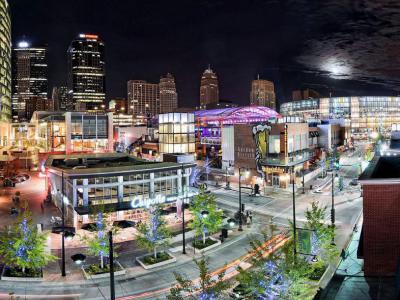 Also called The P&L, the District takes its name from the neighboring landmark 1931 Art Deco skyscraper. The District comprises nine blocks, with lots of dining, shopping, and entertainment options. The area is roughly bounded between Grand Boulevard and Baltimore Avenue on the east and west, and 12th Street and I-670 on the north and south.

While the entire area has been revitalized with entertainment and shopping options, the primary draw is Kansas City Live!, a one-block plaza area that hosts concerts and events throughout the year. The ground floor of the complex focuses on bars and restaurants, while the upper level is dedicated to clubs and entertainment venues. The entire area is pedestrian-only and covered from the elements by a unique Ethylene TetraFluoro Ethylene (ETFE) single-skin membrane. The venue has seen national attention as the settings for some episodes of American Idol. Since the area is directly adjacent to the T-Mobile Center, Kansas City Live! has also hosted World Cup viewing parties and the 2014 and 2015 World Series.

The Power & Light District is zoned as mixed-use and also features apartment high-rises and business buildings. The Midland Theatre, world headquarters for H&R Block, the Alamo Drafthouse Mainstreet Cinema, and the Hilton President Kansas City anchor the development. Pedestrian-only sections of the District have one of the only open container allowances in the country, and the Urban Land Institute gave the project their Award of Excellence in 2009 for its effect on revitalizing downtown.
Image Courtesy of Wikimedia and DanaWelsch.