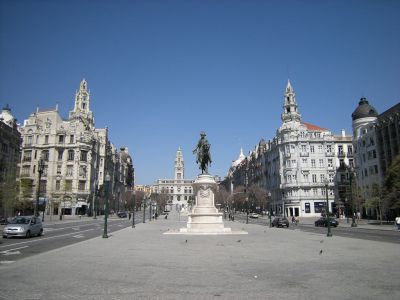 In the lower town or Baixa district of Porto, on the south side of the Avenue of the Allies, lies Liberty Square. This is a largish area of more than three square miles. Originally called New Square, Liberty Square is a product of the 1718 urbanization movement of Porto.

In 1788 the religious order of Saint Eligius, Patron Saint of veterinarians, horses, goldsmiths and blacksmiths, built a convent on the south edge of the square. They demolished part of the medieval wall of the city, replacing it with the convent, an impressive neoclassical building, still standing as the Cardosas Palace.

As each of the two Peters, he fought to preserve the liberal constitution in Portugal and liberty in Brazil. His monument, designed by sculptor Anatole Calmels, is a statue of Peter IV mounted and holding the constitution he had fought for in the Liberal Wars.

The square underwent a change in 1916 when the modern Avenue of the Allies was pushed through to the north of the square. The buildings around the square today are banks, hotels, offices and restaurants. The monument to Peter IV dominates the huge square. Other notable sights would include the Bank of Portugal and the Cardosas Palace.
Image by Leandro Neumann Ciuffo on Flickr under Creative Commons License.