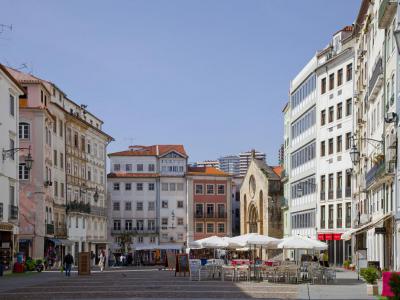 What goes on in Commerce Square? That's a good question. The answer is, not so much in terms of commerce as there used to be. For centuries it was the Marketplace, the place where local people came to shop. These days it is a quiet place to take a break. Most of the shopping now takes place in the mall across the river.

The square is reached by climbing steps from pedestrianized Ferreira Borges Street. At each end of the square are the old churches of Sao Tiago and Sao Bartolomeu. Sao Bartolomeu is in the baroque style of the 18th century but the church itself goes back to the 10th century.

Saint Bart's faces the square. Facing Saint Bart's is a faithful reproduction of the "Pelourinho", the Pillory, from the 15th century. The pillory is two stone pillars. A common sight in Portuguese towns of yore, the pillars were signs of municipal power and used at times to chain criminals. An edifying sight as one leaves church of a Sunday.

Commerce Square, no longer a busy hive of commerce, is now called Praca Velha ("Old Square"). In the 16th century it was the location of the Royal Hospital. In 1790 most of the the hospital was moved to the Jesuit college by the new Cathedral. Not much is left in the Square.

The square today is a quiet place to relax at a table under one of the many umbrellas between the two churches. Rest, eat, drink and think about shopping.
Image Courtesy of Wikimedia and Diego Delso.