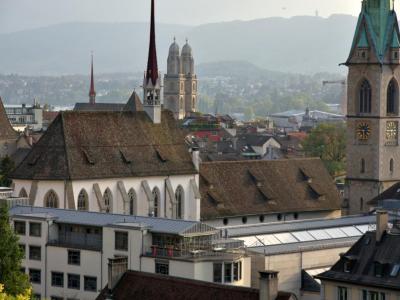 The Preacher’s Church, located in Zurich’s Old Town, has a long history in the city. The first mention of the church in records dates back to 1213, when it served as a preacher’s church. It was run by monks of the Dominican order who focused on spreading the word of the church. In the 1500s, reformation in Switzerland, lead by Ulrich Zwingli, resulted in the Predigerkirche becoming Protestant. During the time of the Reformation, much of the elegant ornamentation was removed from the church.

The building features Gothic forms, with one side visible from the street and the other side integrated into the city’s central library. The library is located on the site of a former monastery that was also shuttered during the Reformation. The church experienced many renovations and restorations. The main form of the church that is visible today dates back to the early 1600s. A steeple was added in 1899, the work of architect Gustav Gull.

Today, the church is primarily Protestant; however, it does employ a Catholic priest and occasionally has celebratory masses with Muslims and Buddhists. It draws immigrants from a variety of faiths. The church is open seven days a week to parishioners and visitors alike.
Image Courtesy of Wikimedia and © Roland Fischer, Zürich / CC-BY-SA-3.0 Unported.