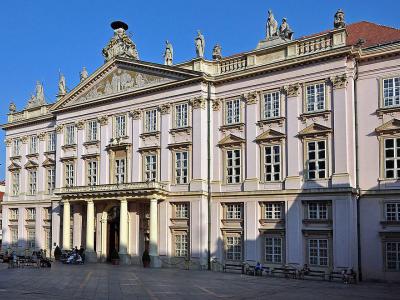 Today this impressive baroque building is the home of the Mayor of Bratislava, but there is much more history to uncover here.

The Primate's Palace was built from 1777 to 1781 and was designed by Melchoir Hefele. At one time, the palace was home to the primary bishops.

The palace's greatest claim to fame was that it served as a backdrop for signing the fourth Peace of Pressburg in 1805. This document, signed in the building's famous Hall of Mirrors, dissolved the Holy Roman Empire. A bust of Emperor Francis II, the last Roman Emperor, stands near the hall to commemorate the event.

The city purchased the palace in 1903 and began an extensive reconstruction project. During the work, 17th-century tapestries were found behind walls.

For a brief time, the palace was home to the President of Slovakia before his permanent residence was built at Grassalkovich Palace.

The palace is open for tours. You can even see the famous Hall of Mirrors, now used for Bratislava City Council meetings.
Image by LMih on Wikimedia under Creative Commons License.