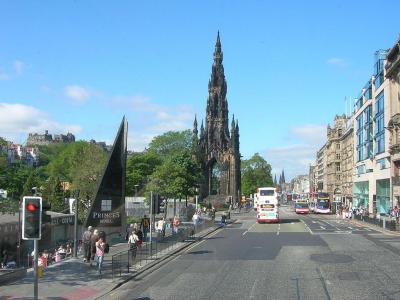 Running from Leith Street to the Lothian Road in the New Town, Princes Street is an over a mile long stretch of shops, cafés and pubs, and is, in fact, the most important thoroughfare in Edinburgh.

The street was named after two of King George III’s sons: Prince George (who later became King George V) and Prince Frederick. The early 18th century buildings here were renovated first in the 19th century and then in the 1960s, under the “Princes Street Plan”, seeing some of them pulled down and replaced with “pro-forma” pattern constructions to enlarge storefronts.

Most of the shops are on the north side of the street, the south side looks out over the valley towards the Old Town and Edinburgh Castle. Most of the valley is taken up by Princes Street Gardens, which were created in 1820 when Nor Loch was drained.

The gardens comprise 38 acres separated by the Mound, and are a favourite tourist venue. Amid the numerous statues and monuments found here, the most important one is the War Memorial erected for Scottish-American soldiers.

In the summer, open-air theatre performances and concerts are held on the Ross Bandstand. There is also a beautiful floral clock to admire.
Image Courtesy of Wikimedia and J Brew.