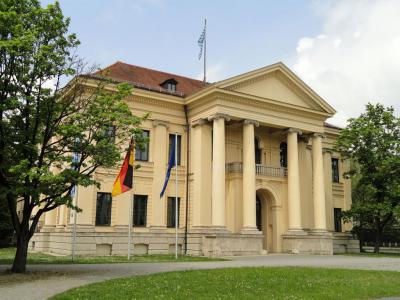 The Prinz Carl Palais is a Neo-Classical style building located in a park north of the Hofgarten in Munich. It is named after one of its owners, Prince Carl, the brother of King Ludwig I, who lived here between 1825 and 1875.

The Prinz Carl Palais went by the names Palais Salabert and Palais Royal after the previous owners. Originally, it was commissioned by King Maximilian I Joseph of Bavaria as a residence for the retired priest, Abbe Pierre de Salabert, who was his former teacher.

Built between 1804 and 1806, the Neo-Classical structure was designed by Karl von Fischer and the interiors were decorated by Jean-Baptiste Métevier and Anton Schwanthaler. The king acquired the building after the death of the Abbe in 1807. Ludwig I, who succeeded Maximilian I Joseph as King, gave the palace to his brother Prince Carl. After the death of Carl, it served as the seat of the diplomatic mission of Austria Hungary and later as the residence of the Bavarian Prime Ministers. Today, it serves as a venue for official receptions by the Bavarian State Governments.

The façade of the building is regarded as one of the finest examples of classical proportion with a portico that has a high pediment standing before a series of Ionic pilasters. Visitors to the Prinz Carl Palais thus get a chance to appreciate the opulence of German palaces in the 19th century.
Image by Daderot on Wikimedia under Creative Commons License.
Sight description based on wikipedia