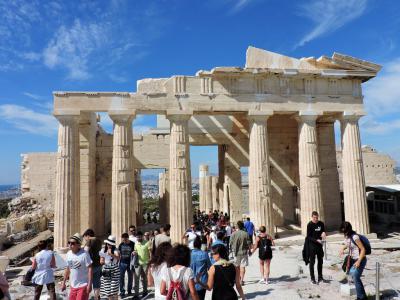 The Propylaea is the monumental gateway to the Acropolis in Athens; the main entrance through which thousands of tourists pass en route to the other monuments surrounding the Acropolis. Due to original stairs having been lost, the public enters and exits via slopes built for this purpose. Whilst walking through this gateway, take time to reflect on the ability of ancient Greeks to build such architecture on such a huge scale and on such a difficult site.

An impressive structure in its own right, the Propylaea was designed by the architect, Mnesicles and constructed between 437-432 BC. It has a central building with two adjoining wings on the west (outer) side, one to the north and one to the south. The colonnades in the east and west had a row of Doric columns, while a row of Ionic columns divided the gateway into three parts. This is, therefore, the first building known to us with Doric and Ionic colonnades visible at the same time. It is also the first monumental building in the classical period to be more complex than a simple rectangle or cylinder.

The Propylaea survived intact through the Greek, Roman and Byzantine periods, but was severely damaged by an explosion of a powder magazine in 1656. It has been partly restored, since 1984.
Image Courtesy of Flickr and Dimitris Kamaras.