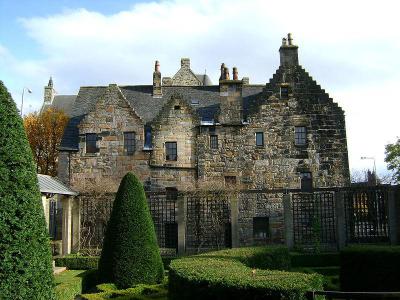 At the top end of Castle Street, you will find Provand’s Lordship, the oldest house in Glasgow, which is the home of a fascinating house museum giving a sense of life during medieval times.

The medieval building was constructed in 1471 and was part of St Nicholas Hospital. Although it was originally intended as accommodation for the Master of the hospital, it was inhabited by a succession of Canons from the Cathedral Chapter. In the 19th century, the Lord Prebendary of Balenock lived here. A prebend is a stipend allocated to priests of the Anglican Church. It is possible that the word “provand” is a corruption of prebend.

In 1906 the house was sold to a family of confectioners who opened a sweet shop at the front and had their factory at the back. They kept the shop until the end of the Second World War when they sold the building to the Provand’s Lordship Society, who wanted to restore the house to its former beauty. In 1978 the Society had no more money, so they gave the house to the City of Glasgow, who paid for renovations and opened it to the public as a house museum in 1983.

Today when you visit the house, you will see it furnished as it would have been in the 17th century, with authentic wooden furnishings of the epoch. The house has three stories connected by a winding staircase and there are many stained glass windows to admire. Behind the house, you can visit the St Nicholas Garden where the medicinal herbs that grow in profusion fill the warm summer air with their delicate perfume.

Tip:
Start with the video introduction for a nice background and be sure to see all three floors (the steps can be difficult for those with balance issues). Make sure you then go to the end of St Nicholas' garden to see the building from a different angle.