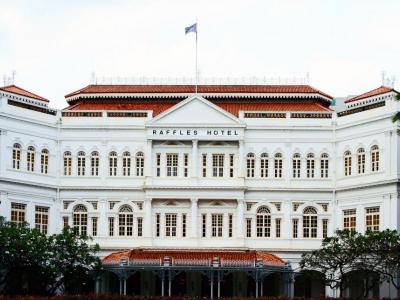 The Raffles Hotel is a historical building, symbol of Singapore and one of its principal sights. This colonial-style luxury hotel was established by Armenian hoteliers, the Sarkies Brothers, on 1 December 1887, and was named after British statesman Sir Stamford Raffles, founder of the city.

Over the decades, the hotel's hallowed halls have played host to the rich and famous from all over the world, seeing among guests the likes of Charlie Chaplin, Somerset Maugham, Elizabeth Taylor and Karl Lagerfield. It also made mark in the local society, being the address where the last tiger of Singapore was killed. The hotel's Long Bar is the birthplace of the iconic national cocktail, the Singapore Sling, and the lobby is the place to countdown into the New Year with its gala ball.

Back in the day, the hotel pioneered numerous state-of-the-art (for the time) features, such as powered ceiling fans and electric lights. Over the years it continued to expand with the addition of wings, a veranda, a ballroom, a bar, a billiards room, as well as other buildings and spaces. At the start of the Japanese occupation of Singapore on February 15, 1942, it is said that the Japanese soldiers encountered the guests in Raffles Hotel dancing one final waltz, while the staff buried the hotel silver—including the silver beef trolley—in the Palm Court. Under the Japanese, Raffles Hotel was renamed Syonan Ryokan, but was reclaimed by the British in 1945.

In 1987, a century after it first opened, Raffles Hotel was declared a National Monument by the Singapore government.

In 1989 and 2017, the hotel underwent extensive renovations during which it was restored to the grand style of its 1915 heyday with significant changes being made. All guest rooms were converted to suites. The Long Bar, a favorite spot of celebrities such as Somerset Maugham, was relocated from the lobby to a new adjoining shopping arcade. The rooms were refurbished and soundproofed, the number of suites increased, and the new technology incorporated. Its various food and beverage outlets were revamped, and the Writer's Bar – formerly in a corner of the lobby – was given its own space. The former Jubilee Theatre was transformed into a ballroom.

Presently, the Raffles Hotel shopping arcade houses 40 specialty boutiques and most of the hotel's restaurants. There is also a beautiful tropical garden on the site.
Image by Velela. on Wikimedia under Creative Commons License.
Sight description based on wikipedia