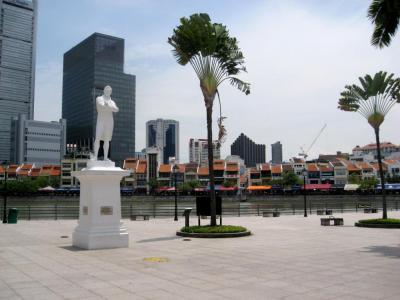 The statue of Singapore's founder, Sir Stamford Raffles, reportedly marks the spot on the northern bank of the Singapore River where the general set foot on the island the very first time on 29 January 1819. Back then it was just an unwelcoming swampland and tiger-infested jungle, while today the area serves as the Civic Precinct accommodating government buildings, a concert hall, galleries, and museums.

For someone who had spent a very limited time on the island (his longest tenure in Singapore was only eight months), Raffles had an extraordinary influence over its development. His name shows everywhere throughout the city, yet his impact extends way beyond the purely civic commemoration. The streets you walk in the heart of Singapore still largely follow the original layout drawn by Raffles. The ethnic districts, such as Little India, were all demarcated by him as well. Even the classic shop-house design – built of brick, with a central courtyard for light, ventilation and water collection – is attributed to Sir Raffles, too. But more importantly, Singapore’s very existence – as one of the world’s greatest seaports – is a direct consequence of Sir Raffles’ vision.

Recognizing the island’s potential as a post to counter the Dutch power in the region, Raffles immediately struck a deal with Abdul Rahman, chieftain of Singapore and subordinate of the Sultan of Johor, to set up a British trading station here. Understanding that the sultan’s loyalties to the Dutch – who were furious at the British incursion into what they perceived their territory – would make the final approval of his deal impossible, Raffles approached the sultan’s brother, Hussein, addressing him as His Highness the Sultan, and concluded a second treaty with both him and the chieftain. Thus, the Union Jack rose over Singapore and sealed its future as the British trading post.

Years on, thanks to its duty-free stance and strategic geographic position at the gateway to the South China Sea, Singapore experienced a meteoric expansion, seeing Chinese, Indian and European migrants coming in search of work and commercial success. By 1860 the city's population had reached 80,000. By the end of the 19th century, with the opening of the Suez Canal and the advent of the steamship, Singapore’s position as the regional hub of international trade had been consolidated.
Image by Sengkang on Wikimedia under Creative Commons License.