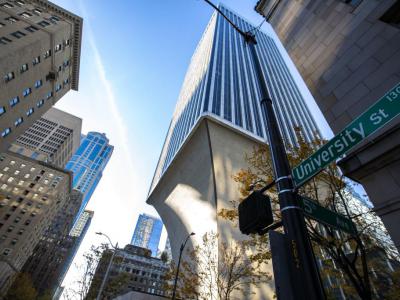 In the Metropolitan Tract of Seattle, at 1301 Fifth Avenue, stands the 41-story, 156.67 m (514.0 ft) Rainier Tower, designed by Minoru Yamasaki, who also designed the World Trade Center in New York City as well as the IBM Building, which is on the corner across the street from Rainier Tower to the southeast.

Completed in 1977, the tower's unique feature is its unusual design, being built atop an 11-story, 37 m (121 ft) concrete pedestal base that tapers towards ground level, like an inverted pyramid. Locals often refer to it as the "Beaver Building" (as its physical appearance looks like a tree being felled by a beaver) or the "golf tee" building.

Beneath the tower was Rainier Square, an underground shopping mall that was demolished in 2017. Both the mall and tower were originally named after Rainier Bank, which was merged in the 1980s into Security Pacific, which was eventually merged into Bank of America.
Image Courtesy of Flickr and GoToVan.