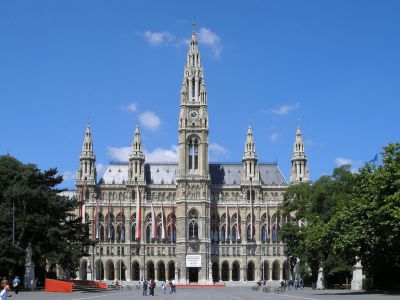 The Wiener Rathaus (Vienna City Hall) is the seat of the local municipal government and the Landtag (legislative assembly) of Vienna. The complex was constructed from 1872 to 1883 to a design by Friedrich von Schmidt, whose statue is found right behind the city hall, on Friedrich-Schmidt-Platz.

The richly adorned facade of the building is an outstanding example of neo-Gothic architecture, modeled on the Flemish and Brabant medieval analogs. The exterior features five towers, the tallest of which, in the center, rises to a height of 98 meters (322 ft).

Sitting atop the main tower is the 3.4-meter-tall iron statue of Rathausmann. Installed in 1882, this is one of the key symbols of Vienna. To reach the top of the tower one has to climb 331 steps; in the end, those who manage the ascend are greeted with a bird's eye view of the capital.

Another attraction in the building is the historic Baroque-style 'Wiener Rathauskeller' restaurant, serving traditional Viennese delicacies. Surrounding the Rathaus is the spacious Rathauspark.

In the upper part of the facade, there are multiple figures. Among them are three equestrian high reliefs depicting Franz Joseph I (in the center), Rudolf III (on the right), and Rudolf IV (on the left). Two more statues on the sides of the main entrance represent Power and Justice. In the keystone in front is the portrait head of Friedrich Schmidt (flanked by the images of his collaborators, Franz von Neumann and Viktor Luntz).

Standing on the parapet in the center of the frontal is the allegorical image of the city of Vienna, called Vindobona. Flanking her are the standard-bearers with the coats of arms of Vienna and the Austro-Hungarian monarchy. On both sides, there are 18 statues of soldiers from different centuries plus the shield bearers with the coats of arms of the Vienna suburbs (e.g. St. Ulrich or Rossau) and 12 crown lands (Carinthia, Tyrol, Salzburg, Upper Austria, Styria, Lower Austria, Bohemia, Moravia, Silesia, Carniola, Galicia, and Bukovina).

In the back of the building, in the middle, there is another statue of Vindobona. On each side of her are four allegorical figures: Justice, Strength, Art, and Science on the right; and Wisdom, Faithfulness, Education, and Charity on the left.

Other statues, on the side facades, represent professions. The ones overlooking Lichtenfelsgasse include a carpenter, a mechanic, a goldsmith, a musician, a sculptor, a master builder, a painter, an armorer, a blacksmith, and a shoemaker. Those facing Felderstraße represent a tailor, a cloth maker, a merchant, a book printer, a legal scholar, a doctor, an innkeeper, a brewer, a baker, and a butcher.

Tip:
There is a free German-language guided tour every Mon/Wed/Fri at 1 pm where they also provide audio guide devices in a number of languages. You'll need to give up your passport as a deposit.