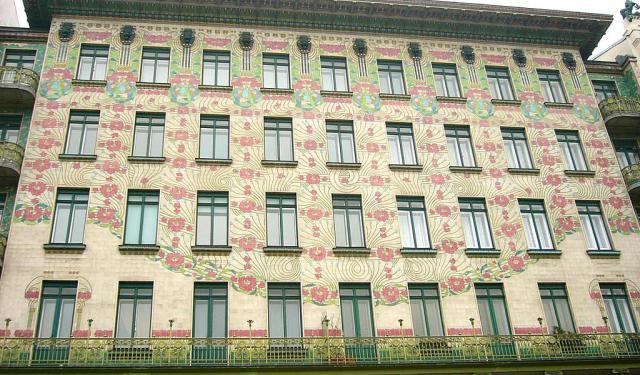 Unlike any other architect, Otto Wagner (who was also an urban planner, furniture designer, and interior decorator) holds the key to Viennese turn-of-the-century architecture and design, which he helped drag away from the more historical styles and into Art Nouveau (Jugendstil) and beyond, combining aesthetics with functionality in his many building projects. As he's claimed himself, "Anything impractical cannot be beautiful". If you want to trace this Wagnerian period when in Vienna, follow our self-guided walking tour to suit your itinerary.
Image Courtesy of Flickr and Rory Hyde.
How it works: Download the app "GPSmyCity: Walks in 1K+ Cities" from iTunes App Store or Google Play to your mobile phone or tablet. The app turns your mobile device into a personal tour guide and its built-in GPS navigation functions guide you from one tour stop to next. The app works offline, so no data plan is needed when traveling abroad.

The so-called Majolica house is the inspiration of the legendary architect and designer Otto Wagner during his secessionist phase of design. The name of the building derives from the flowing flower motifs on the tiled outside façade that embellish the place with beautiful shades of green, blue and pink.

Wagner made this new style of architecture famous for its simple, yet elegant design. Exterior walls were left smooth and flat, and windows typically became less ordained than in previous Viennese styles of architecture. The simple, clean look was meant, in some fashion, to be representative of how clean and simple the apartment complexes were on the inside. Despite its rectangular shape, the beautifully maintained building was and still is considered an Art Nouveau masterpiece today.

Another secessionist creation is a corner house at No. 38, with reliefs from Koloman Moser and gilded stucco medallions from Othmar Schimkowitz. Nearby is a third house, simpler than these, at 3 Köstlergasse, said to have been the town residence of Wagner for a time, and, finally, you can put Wagner's functionality to the test by going down into his Kettenbrückengasse subway station.

Tip:
Visit on a bright day and take binoculars to fully appreciate the detail under the eaves and the balcony areas.

Known as the Medallion House because of its decor of gilded medallions by Wagner's student and frequent collaborator, Koloman Moser, this apartment block adjacent to the Majolica House on Linke Wienzeile was constructed by Otto Wagner in 1898-99 in the same Vienna Secession style.

As compared to the Majolica's design where green, blue and pink shades prevail, here gold is the master and the decorations adorn not only the front façade but – given that the building is on a corner – the length of the other sides as well. The roof, visible from far away, features several sculpted heads, called "The Criers", or "The Crying Women" by Othmar Schimkowitz, who provided sculpture for other Vienna Secession landmarks, including the angels topping the Postsparkasse building.

As one of Europe's prime Art Nouveau jewels, the Medallion House prominently features on a €100 gold coin. Today, it houses a branch of an Austrian bank.
Image Courtesy of Wikimedia and Gryffindor.
3

There was a time in the early 20th century where Vienna was the center of the world for culture – the age of Gustav Klimt and the Secessionist movement's cutting-edge art. This building represents that time, not only as a geographical location but also in its architecture and, no less notably, the "Beethoven Frieze", painted by Klimt in 1902 as a commentary on Beethoven's Symphony No. 9.

Artists were seceding from the conventional art world, and while the only real painting inside is the famous frieze, the building itself, designed by architect Joseph Olbrich, contains a number of features acting as a unique statement of intent – from the the turtles that support massive plant pots on either side of the entrance to the great dome made from 2,500 gilt laurel leaves and 300+ berries, that the Viennese were quick to christen "the golden cabbage" (Olbrich wanted it to be seen as a dome of laurel, a subtle classical reference meant to celebrate the triumph of art).

Inside, the museum has a minimalist approach to portraying the exhibitions, which allows visitors to really focus on the art. The atmosphere is very calming and magical, encouraging to stop and quietly immerse yourself in the surroundings. Photos are allowed.

Why You Should Visit:
Interesting especially if you're a fan of Klimt, with the Beethoven Frieze as the biggest highlight – one of those pieces you'll never forget!
The building's façade is quite stunning as well and you can see many tourists stand across the busy main road taking pictures.

Tip:
The audio guide (DE/EN/FR/IT) is very useful here; much easier to sit and listen as you look at each section than having to read explanatory notes.

The master of Viennese Jugendstil, Otto Wagner was appointed architectural supervisor for much of the city's underground system in the 1890s, and the stylish pair of underground railway exit pavilions he designed next to Karlsplatz are among the city’s most appealing buildings. Well known for their modern look, floral motifs, curving rooflines, and particularly for their exposed steel framework (in keeping with Wagner’s belief in architectural honesty), they've achieved the perfect melding of form and function for the architectural world.

Having opened to the general public in 1899, the original old line was converted to the newer UBahn rail system in the 1980s. For this purpose, plans were made to destroy the old Stadtbahn station; however, a cry of outrage from the Viennese community saved the two pavilions. In order to make them function as part of the modern rail system, they were first completely dismantled, then re-assembled on a structure that was 7 feet taller than before. The two pavilions face each other: one is now a quirky café; the other hosts an exhibit on Wagner's most famous work, with a model of the architect's stunning Church at Steinhof as its centerpiece.

Tip:
Around the Karlsplatz you can also find the grand University of Technology, the splendid Baroque Karlskirche (St. Charles' Church), the Vienna City Museum and the startlingly original Secession Building – a key architectural icon of Vienna. In the summer, Karlsplatz is a great place to sit under the trees of Resselpark.
Image Courtesy of Wikimedia and Pudelek.
5

After the great Musikverein and its famed Golden Hall, Vienna's most illustrious concert venue is the Konzerthaus, home to the Wiener Symphoniker, three concert halls, the Akademietheater and a studio theatre. Built in late Secessionist style in 1913 by the great Austrian theatre-building duo Fellner & Helmer, it boasts a lovely, illuminated wrought-iron-and-glass canopy, surmounted by octagons and a half-moon gable.

Up to four simultaneous performances – in the richly decorated Grosser Saal, the Mozart-Saal and the Schubert-Saal, plus the new Berio-Saal – can be staged. The classical music programme here tends to be a bit more varied and adventurous than the Musikverein's, with the odd nod to cabaret, jazz, world music and even pop.

No matter what time of year one visits Vienna, there will be great offerings to see at the Konzerthaus. Needless to say, the acoustics are excellent, with new features that improve sound quality especially due to its moderate size which brings each music experience closer to the audience. Meanwhile, the seats are spacious and comfortable, which is not a given for some of these older venues.
Image Courtesy of Wikimedia and Clemens Pfeiffer.
6

When Otto Wagner built himself a "town house" at Rennweg 3 in the 1890s, it was clearly still a desirable residence. Now known as the Palais Hoyos and occupied by the Croatian embassy, this early Wagner work is very much in the Ringstrasse style, with its elaborate wrought-iron balconies and stucco decorations, but you can discern hints of his later work in touches such as the projecting cornice and the very ﬁne reliefs on the upper ﬂoor. Wagner also designed the houses on either side, including no. 5, where the composer Gustav Mahler lived from 1898 to 1909.

Close by, on Rennweg, stands the Gardekirche, completed by Nicolò Pacassi (Maria Theresa's court architect) in the 1760s, but refaced in a Neoclassical style just six years later. The Rococo interior, however, was left alone, and still retains its richly gilded stuccowork, ribbed dome, bull's-eye windows and lantern. Built as the chapel of the imperial hospital, it was handed over to the Polish Guards in 1782, holds services in Polish and is popularly known as the Polnische Kirche.
Image Courtesy of Wikimedia and Thomas Ledl.