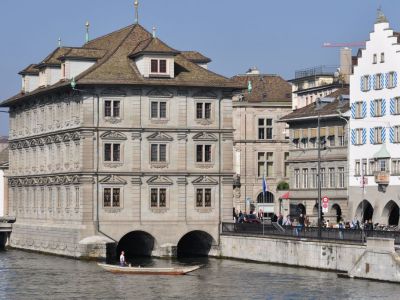 The Rathaus dates to the 1690s, and it was the seat of the Republic of Zurich until 1798. It sits on the site of a city council building built in 1397 built on a courthouse dating from the 1200s. The current building is owned by the Canton of Zurich, which uses it as home to both legislative chambers, the canton's parliament, and the city's parliament.

City Hall, or Stadthaus, is where the executive government and city council meet. It's a separate facility, located on the Limmat's west side, just to the south of Town Hall Bridge. You can view government sessions, if they are in progress, from a terrace on the second level.

Zurich Rathaus is located on the Limmat's east side, sitting right on the riverbank at the pedestrian Town Hall Bridge, known locally as Rathausbrücke. The bridge is a public square, known as "vegetable bridge" since medieval vegetable markets were held here. This is the historic center of the city, back to when the Romans called the town Turicum. The bridge connects the Lindenhof and the Rathaus quarters of the town.

The bridge was a fixture of Zurich since medieval times when it was built entirely of wood. Expansions were performed in 1375 and 1420. It has always been oversized, with buildings and landmarks built over the water. It has had its present-day dimensions since the early 1600s, and in the late 1800s, it was gradually replaced with stone and cast-iron construction.

The bridge and its square are still used for festivals and markets to this day. There are numerous souvenir shops, restaurants, and cafes in the area. Since it's a walking district, it's a great place to explore on foot.
Image Courtesy of Wikimedia and Roland zh.