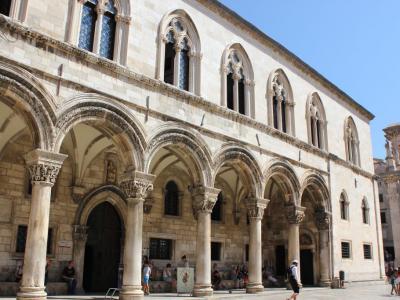 The Rector’s Palace is a historical museum that provides a live illustration of the 15th century seat of power in Dubrovnik when it was the home of the Rector and the City Council.

The palace itself is rather modest. Opulence has never been much in favor with the local rich. Viewing this location, one may be surprised as to how simple the design is. There is no luxury to be found. Instead, there are great historical collections of metalwork, paintings, and textiles from the ancient period, among which there are pieces of works by the artists like Tintoretto and Bordone.

The palace was designed by Onofrio della Cava, the same architect who built Dubrovnik's landmark fountains. The building was extensively damaged in the late 1400s. During reconstruction, some of the more classic Italian Renaissance style elements crept into the design. The palace also suffered from the 1667 earthquake, upon which its atrium was rebuilt and some Baroque style elements were added.

*** Game of Thrones Tour ***
The Rector’s Palace appears in the Game of Thrones series Season 2, Episode 6 “the Old God’s and the New” when Daenerys visits the Spice King’s mansion to ask the Thirteen rulers of Qarth for ships to carry her army across the Narrow Sea, but is refused. The Qarth was filmed on a number of locations around Dubrovnik. The Rector’s Palace is one of them, where the indoors scenes were shot. Also, the courtyard was used to film the scene between Khaleesi and the Spice King (Season 2).

Why You Should Visit:
You can go up the stairs to see the Rector's rooms. There are some gorgeous pieces of furniture and artwork to admire.
On the ground floor, the various rooms house some historic pieces from the jail and armory, plus lovely sculptures.

Tip:
Try and get to the palace early in the day before the cruise ship crowds get here.
The place is particularly beautiful after dark for taking photos.
There's no English interpretation without the brochure, so make sure you get one if you go inside.