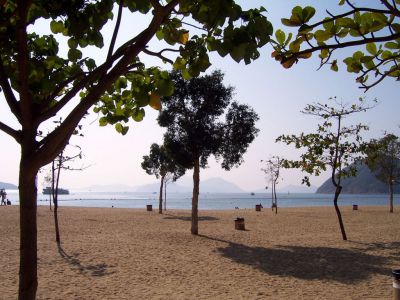 The Beach has a temperate climate, and even in the months of November and December, it is balmy enough to allow sunbathing. During the summer months, the beach is packed with tourists, and usually, there is only room enough for standing.

The Repulse Bay was developed into a beach in the 1910s. During the 1920s, the Repulse Bay Hotel was built in order to attract tourists. The beach was artificially extended, and the sand that is close to the shore is different from that which is near the water. Until the 1960s, the construction of residential apartments was restricted, but Dr. P. P. Chiu and his brother constructed 3 blocks of six storey luxury apartments that overlook the bay.

Why You Should Visit:
Great for a few hours relaxing. Well-maintained beach with shingle sand at the top going down to soft sand at the water's edge. Perfect blue sea, with great views of the little islands dotted around.
Nice café and shops along the promenade; there are also a 7-eleven, play areas for kids and many public toilets and showers. Lifeguards always on duty.

Tip:
Can get crowded and make sure you pack beach mats and towels to sit on (if possible bring a beach umbrella if the sun is too hot).
Image by Enoch Lau on Wikimedia under Creative Commons License.