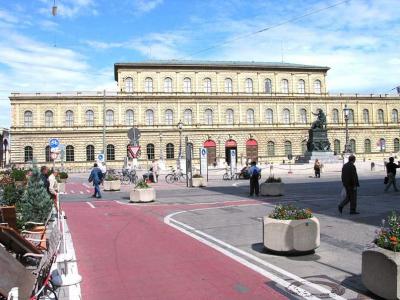 The Residenz Royal Palace (or Munich Residenz) is the former seat of the Bavarian Government and the residence of dukes, electors and kings from the Wittelsbach family, rulers of Bavaria, who lived here between 1508 and 1918. Today, the palace houses a museum and boasts some of the finest room decorations in Europe.

Maximilian I of Bavaria commissioned the construction of the palace, then a small castle in the northeastern corner of Munich, in the early 17th century. In his time, King Ludwig I commissioned architect Leo von Klenze to expand it further toward the current proportions. The building was severely damaged by the World War II bombardments and was completely restored only in the 1980s.

Today, the Residenz consists of a museum, a concert hall, the Residenz Treasury, and the Cuvilliés Theater. The oldest part of the palace – the Antiquarium – is a magnificent, Europe’s largest Renaissance hall with statues from antiquity. The entire complex comprises 10 courtyards and 130 richly decorated rooms. The Treasury preserves jewelry and objects made of gems and precious metals belonging to the Wittelsbach family. The world’s most extensive coin collection of King Albert V, consisting of 300,000 coins, spanning from the ancient times to the early 20th century, is also displayed here. The palace is encompassed by a French-style garden with a fountain and a circular temple with replica of the Bavaria statue on top.

Why You Should Visit:
Versailles-like in its gilded opulence and glory, including the amazing courtyards.
The complex is huge, even more so now that several rooms and corridors have been renovated and opened to the public after many years.
There are an 'old' and a 'new' area to explore and a very good audio guide included with the ticket price.

Tip:
You can buy combined tickets to the Theatre and the Treasury for a complete experience.
The audio guide offers wealth of information about the artwork/rooms/historical events, so you can skip forward to the parts of the tour suiting your interest.
A full tour takes several hours, so you may want to split it into sections with a break for coffee & snacks.