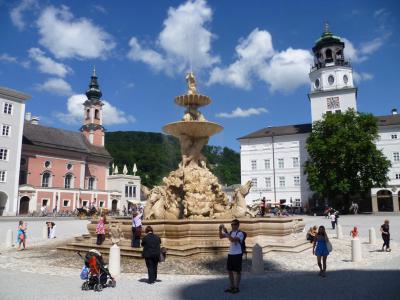 The Residenzplatz is a large square located in Salzburg’s Old Town. It is flanked by the old and new residences of the archbishops and the Salzburg Cathedral.

During the initial construction of the square, the surrounding Medieval homes and the cemetery above the ancient Roman Forum all had to be leveled. The Forum, dating back to Salzburg’s early days as the Roman settlement of Juvavum (15BC-488AD), was partially excavated in 2008 revealing artifacts and walls from the time of Emperor Septimius Severus (193-211).

Archbishop Wolf Deitrich von Raitenau commissioned the building of the Residenzplatz in front of the old residence of the Archbishops. Over fifty-five medieval burgher houses and an ancient cemetery were demolished to make way for the square. The design was based on the style of Baroque Italian piazzas and was built according to the plans of Italian architect, Vincenzo Scamozzi. Besides the residences and the cathedral, the square is also flanked by a row of burger houses that now house shops and a café.

The most beautiful part of Residenzplatz is the ornate fountain called the Residenzbrunnen. It is the largest Baroque fountain in Central Europe. It was commissioned by Archbishop Prince Archbishop Guidobald von Thun and created by Tomasso di Garona between 1656 and 1661. The base of the fountain has three sea horses around a central rock. The rock is covered with figures of marine plants and animals. The statues of four men carrying a bowl stand on the rock and the figures of three dolphins rise from the bowl carrying another bowl where there is a figure of the Greek sea God Triton holding the shell of a snail. The burgher houses around the square have uniquely ornamented facades and Residenzplatz is the venue for an open air cinema that takes place annually in July and August.

***The Sound of Music Movie***
Set on the site of a former ancient Roman Forum, the large Residenzplatz square is the location where Maria belts out “I Have Confidence in Me” in The Sound of Music movie while crossing the square by bus on her way to the Trapp villa, after leaving the convent. The focal point of this square — and one of the main filming sets – is the massive central 45-foot-tall Horse Fountain (Residenzbrunnen) in which Maria playfully splashes the spouting horses. Completed in 1661, the upper section of this fountain is the replica of an iconic Bernini’s Triton Fountain in Rome, and is the largest Baroque fountain outside Italy.

Later in the film, Nazi soldiers march through the square against the backdrop of their flag draped over the entrance to the Old Residenz Palace on the west side. The dreary scene of the soldiers entering the town symbolizes German annexation of Austria, the so-called Anschluss, in March of 1938. Because of the disdain for the Nazi symbols in Salzburg, filming this scene took a lot of effort.

Why You Should Visit:
Has a very beautiful fountain from the 17th century in the middle (considered one of the most significant Baroque monuments in Europe), and a perfect view of the Salzburger Dom.

Tip:
Grab some lunch from bakeries/shops nearby and sit on one of the benches near the fountain, enjoying the view.
Image by Barbara Marko-Bartilla on Wikimedia under Creative Commons License.