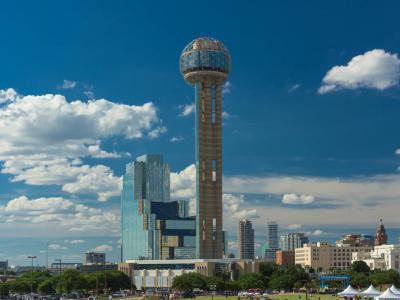 Reunion Tower has been a fixture on the Dallas skyline since 1978. At 561 feet tall, it was one of the tallest structures in Dallas, and it is one of the city's most recognizable features at night. Described by one reporter as a "giant dandelion", the building is surrounded by a superstructure in the shape of a sphere that has over 250 lights placed at all the joints.

Inside the three outside legs that hold up the sphere are elevators that will give visitors a ride to the 50th-floor observatory as well as the restaurant and café that make up the top floors. The ride takes about a minute and the elevators have a windowed front that allows for spectacular city views. The high-end rotating restaurant, called Five Sixty (a nod to the building's height) was opened by Wolfgang Puck in 2009 and the food has a very definite Asian flair.

The Reunion Complex – which consists of Reunion Tower, Reunion Arena, and the Hyatt Regency Hotel – was seen as a tremendous boost to downtown Dallas and civic pride. The long-awaited opening on April 15, 1978, featured a spectacular light show on the tower and a massive fireworks display that brought freeway traffic all over the city to a halt.