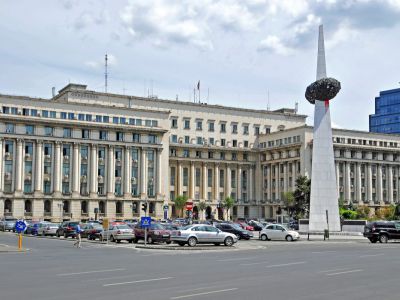 Piaţa Revoluţiei (Revolution Square) was once known as Piaţa Palatului (Palace Square), and was renamed after the Romanian Revolution of 1989.

The former Royal Palace (currently, the National Museum of Art of Romania), the Athenaeum, the Athénée Palace Hotel, the University of Bucharest Library, and the Memorial of Rebirth are all found here. The square also houses the former Central Committee of the Romanian Communist Party headquarters (from where dictator Nicolae Ceauşescu and his wife fled by helicopter on December 22, 1989). In 1990, the building became the seat of the Senate and since 2006 has accommodated the Ministry of the Interior and Administrative Reform.

From 1930 to 1948, an equestrian statue of King Carol I dominated the square before being destroyed by the Communists. In 2007, the Bucharest City Hall set out to recreate the statue based on the original blueprints kept by the sculptor's (Meštrović) family.

In August 1968 and December 1989, the square saw two dramatic events marking, respectively, the height and the lowest point of Ceauşescu's rule. The former came when Ceauşescu openly condemned the Soviet invasion of Czechoslovakia in 1968 and started pursuing the policy of independence from the Kremlin. The 1989 meeting, presented by the official propaganda as a "spontaneous movement of support for Ceauşescu", was meant to emulate the 1968 assembly; instead it caused a popular revolt erupt against the regime.

The Memorial of Rebirth, inaugurated in August 2005, commemorates the struggle, which claimed nearly 1,500 lives and brought Communist era in Romania to its end. The memorial features a 25-meter marble pillar, upon which a metal "crown" is placed. The pillar stands amid a 600 m² plaza covered in marble and granite. Despite a commonly-acknowledged need for such monument, its design has been largely criticized as devoid of symbolism, too abstract, and not adequately reflecting the suffering and magnitude of the 1989 revolution.
Image Courtesy of Flickr and Dennis Jarvis.
Sight description based on Wikipedia.