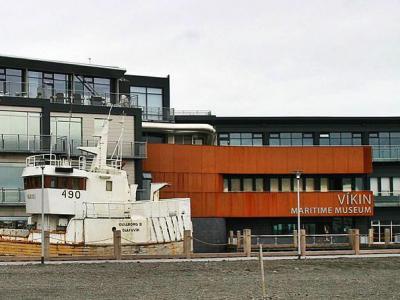 Iceland's history and culture have been deeply influenced by the sea. Fishing and fish processing remains a vital component of the island's economy and is the main focus of the Maritime Museum of Vikin (the name 'Vikin' indicates the cove where the museum is located). There's a lot to see here, including a fascinating exhibit on the three "Cod Wars" fought with the United Kingdom over fishing rights in the North Atlantic. Coast Guard ships like the ICGV Óðinn (which you can tour at the museum) dragged heavy net cutters to sever the lines of British trawlers. Iceland eventually won the dispute and was granted a 200 nautical mile exclusive fishing zone.

The museum also houses a gift shop with the same opening hours as the museum, and the Bryggjan Café, serving refreshments and alcoholic drinks.