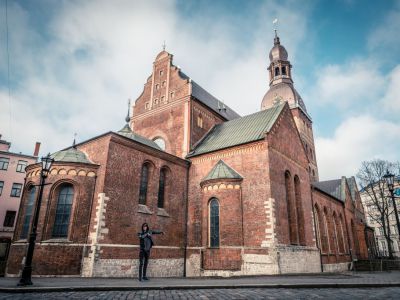 Riga Cathedral is the oldest religious site in the city and one of the oldest in Latvia. Its foundation stone was laid on July 25th, 1211 by Bishop Albert of Riga. Originally, the church was built in a geometric, Romanesque style and was meant to become a centre of Christianity in the Baltic region. In the 14th-15th centuries it had side chapels and a western cross-nave added, along with the tower walls elevated and an octagonal spire built in. In the following centuries, the cathedral endured many reconstructions. The most drastic ones took place between 1881 and 1914, when part of the building was completely remodelled. Another reconstruction was undertaken in the 20th century. During the Soviet period, the cathedral was used as a concert hall.

Presently, the Riga Cathedral features a combination of Gothic, Romanesque, Baroque and Art Nouveau styles. Its key feature is the 6718 pipe organ, built by E.F. Walcker & Co in 1883-1884, which is considered to be one of the most precious organs in the world.

Today, the cathedral serves as the country's main Lutheran temple and is the seat of the Archbishop of Latvia Evangelical Lutheran Church.
Image by Kārlis Dambrāns on Flickr under Creative Commons License.