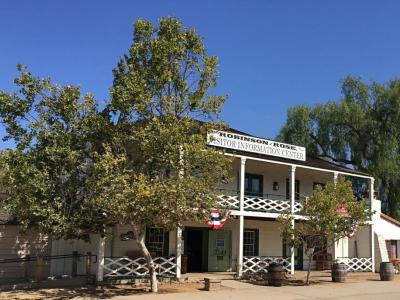 Facing Old Town Plaza, this house was Old San Diego's original commercial center, housing railroad offices, law offices, and the first newspaper press. A classic example of Victorian-style architecture, it is a fairly large size house when people tended to build small. Spend some time here and you'll find a large diorama of the 1872 Old Town (a fascinating look in to the past!), along with tourist information and numerous souvenirs.

James Robinson, formerly from Texas, came to San Diego in 1850 and became a well to do lawyer and businessman. Over time, he got involved in all aspects of the town's development and was quite successful as a lawyer who was known not to lose cases in court.

After his death in 1857, the building was used by a variety of local businesses like the San Diego Herald, Wells Fargo, and several other businesses. Sadly, it had fallen into disrepair over time, until the State rebuilt the location in 1989, and added it to the Historical Park as the Visitor Center. Admission is free.