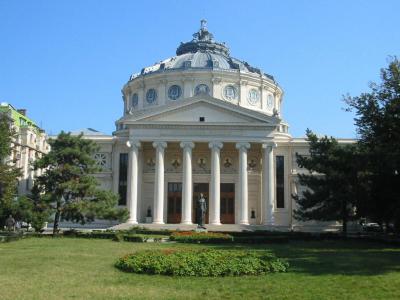 Dedicated to serve the needs of art and science, the Romanian Atheneum Cultural Society was founded in 1865 by a group of cultural and scientific personalities, such as Constantin Esarcu, V. A. Urechia and Nicolae Creţulescu. The building was designed by French architect Albert Galleron, and was built on the property that once belonged to the Văcărescu family. Although the building itself was inaugurated in 1888, the actual work on it continued until 1897. A portion of the construction funds was raised by public subscription in the course of a 28-year long campaign, the slogan of which is still remembered today as "Donate one leu for the Ateneu!"

On December 29, 1919, the Atheneum hosted the conference of prominent Romanians who voted to ratify the unification of Bessarabia, Transylvania, and Bukovina with the Romanian Old Kingdom in a bid to resurrect Greater Romania.

The overall style is neoclassical, with some more romantic touches. In front of the building there is a small park and a statue of Romanian poet Mihai Eminescu. Inside, the ground floor hosts an ornate conference hall as large as the auditorium above; the auditorium seats 600 in the stalls and another 52 in loge seating. A 75-metre long and 3-metre wide fresco decorates the inside of the circular wall of the concert hall. Painted in the al fresco technique, the piece depicts the most important moments of the Romanian history, starting with the conquest of Dacia by Roman emperor Trajan and ending with the realization of Greater Romania in 1918.

Recognized as the symbol of Romanian culture, the building was added in 2007 to the Label of European Heritage Sites.
Image Courtesy of Wikimedia and Bogdangiusca.
Sight description based on Wikipedia.