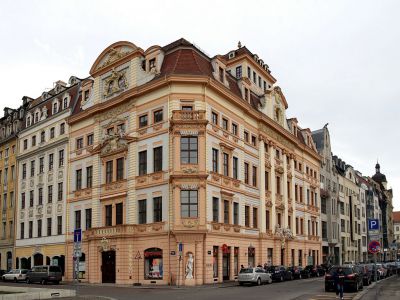 Romanus House is a historical edifice in downtown Leipzig on the corner of Katherine and Bruhl Streets. This beautiful Baroque-style house, reminiscent of old Dresden architecture, today serves as a commercial building. The house covers four city plots of land and is mounted on a plinth-like ground floor.

There are three main stories above the ground floor and another short story under the mansard roof. The North facade has 13 window axes, overlooking Bruhl Street. The East facade has six axes facing Katherine Street. The corner of the house is beveled at a 45-degree angle with bay windows.

The facades have ornate ledges. The tall gable on the north side has an oval window. The East facade has a small gable with two kidney-shaped windows. Garlands adorn the sills, entrances, and ceilings. A statue of Hermes by sculptor Balthasar Permoser poses in the ground floor corner niche.

Romanus House got its name after the former Mayor of Leipzig. Franz Conrad Romanus was the mayor in 1701. He commissioned the building to be designed by the council mason, Johann Gregor Fuchs.

The Romanus House changed hands many times, finally being owned by contractor Jurgen Schneider in the 1990s.
Image Courtesy of Wikimedia and Appaloosa.