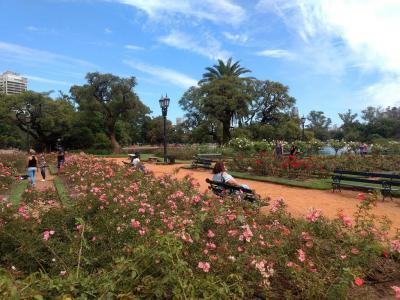 The Rose Garden or El Rosedal de Palermo is a tranquil escape from the bustle of Buenos Aires. It has over 15,000 species of roses in a spectrum of colors and lies on the banks of an artificial lake.

The land that is now the rose garden belonged to Juan Manuel de Rosas, a former Argentine soldier and governor. The government assumed the land after his defeat and subsequent exile. It was designed by French-Argentine landscape architect, Carlos Thays who also designed the botanical gardens. It was opened to the public in 1914. The garden is surrounded by a wrought iron fence.

Attractions within the Rose Garden include the Andalusian Pavilion which is a paved space surrounding a fountain donated to the city in 1929 by the Spanish city of Seville, a magnificent white wooden bridge over the artificial lake constructed in 1914 based on the design of architect, Benito Carrasco, a poets garden with busts of well known Argentine and international poets including Shakespeare and Jorge Luis Borges and the lake itself with its wooden piers, swans and amphitheater. There is an arbor covered with a range of climbing rose species and red gravel paths wind around the many rose bushes that give the garden its name.

Why You Should Visit:
Charming, relaxing and free, with gardeners working continuously to keep the place tip top.
The surroundings are perfect for a bike ride or a walk by the lake where pedal boats can be rented.

Tip:
Will be packed on nice spring and summer weekends, so if looking to enjoy a quiet time, try going during weekdays in the early hours.
The garden is also beautiful out of season but highly recommended to see when it is blooming.