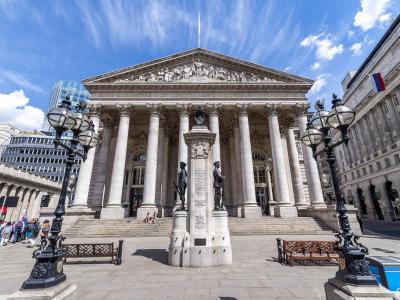 Sir Richard Clough, a merchant from Wales and agent of Queen Elizabeth I, was the first to recommend the creation of the Royal Exchange in 1562. The design of the Exchange was inspired by the Antwerp bourse, the first organized commercial exchange in the world. Sir Richard suggested the exchange to his protege, Sir Thomas Gresham.

Sir Thomas had served King Henry VIII, King Edward VI, Queen Mary and Queen Elizabeth I as agent of the Crown. He was familiar with the Antwerp bourse. In 1565 he proposed the City of London's Aldermen build what would become the Royal Exchange. And he would pay for it.

Queen Elizabeth awarded the building's royal title along with a license to sell alcohol and other goods. Stockbrokers were considered rude and were not allowed in.

The Royal Exchange of today was designed by Sir William Tite and opened by Queen Victoria in 1844. It is an oblong rectangular structure enclosing a courtyard.

It has a portico supported by eight Corinthian columns. The portico is surmounted by a pediment holding a tympanum with reliefs by Richard Westmacott (the younger). The reliefs represent London and foreign traders.

Niches in the courtyard hold statues of Charles II and Elizabeth I. A mounted statue of the Duke of Wellington is in front of the portico. The London Troops Memorial, surmounted by a bronze lion and flanked by two bronze soldiers memorializes London soldiers of World War I.
Image Courtesy of Wikimedia and Poidabro.