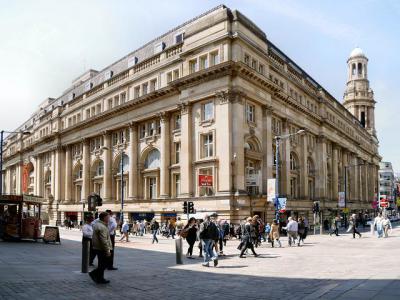 Located on New Cathedral Street in Manchester’s bustling city centre, the Royal Exchange building houses a theatre and shopping arcade. Whilst the building has stood on this site since the late 18th century, it has only been used as a theatre since the 1970s. Built in the Georgian era and upgraded in Victorian times, the Royal Exchange building formed the heart of Manchester’s commercial district, and was the venue for the trading of textiles manufactured in the city’s famous cotton mills. By 1931, the main hall was the largest trading room in the country. The building’s heyday as a trading centre was brought to an abrupt end by the Blitz, when the trading hall was badly damaged. The building was left empty after World War 2.

Facing possible demolition, the Royal Exchange was saved and converted into a theatre and shopping centre. The Royal Exchange Theatre was opened in 1976 by Sir Laurence Olivier. The main theatre space is designed ‘in the round’, meaning that the stage and performers are completely surrounded by the audience. It is the largest theatre in the round in the UK, and hosts up to 350 productions each year. The bulk of the theatre’s schedule is built around stage classics from Shakespeare and Chekhov, although touring foreign theatre groups and musicians play there regularly. The theatre has a box office, contained within the Exchange building.
Image by David Dixon on Wikimedia under Creative Commons License.