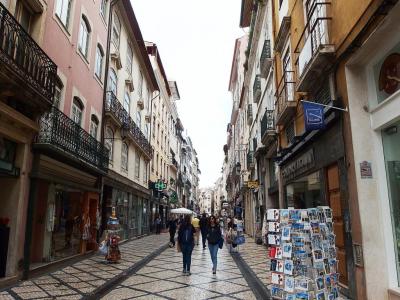 Ferreira Borges Street is an aptly named shopping street. Jose Ferreira Borges (1786-1838), a graduate of Coimbra University, was an attorney and the leading author of the Portuguese Commercial Code of 1833, also called the Ferreira Borges Code. He wrote many books concerning economic and political topics.

Rua Ferreira Borges Street has had other names before Jose. It has followed the same path since the middle ages. It was the first street to be paved with cobble stones. It has always been a shopping street. It runs from the Church of Santa Cruz and the Town Hall to the river front and the Santa Clara Bridge.

The actual layout of the street has not undergone any widening or like changes in its existence. Because of this perhaps many mansions and buildings from the 17th and 18th centuries still line the way. Is there shopping? Yes, the best bookstores, patisseries, cafes, clothing stores and gift shops and offices of all kinds.

The street is mostly pedestrianized. It is a main passage of Caixa de Coimbra and it connects the Toll Square to Visconde da Luz Street. Jose would have loved it.
Image Courtesy of Wikimedia and Palickap.