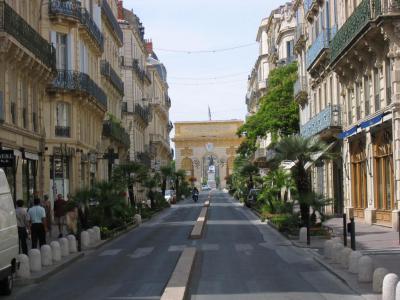 Foch Street was originally Peyrou Street, a commune road of Montpellier established in 1205 with the construction of the second fortification of the town. Known as a "cloture commune", it allowed access to the gate of the Rampart called the Gate of Peyrou.

Foch Street is a commercial artery in the town center. The street begins in the west by the Francois Franque Street, adjoining the promenade Peyrou. It passes over the Vialleton Bridge and under the Arch of Triumph. Cut by the the Square of the Martyrs of the Resistance, it ends in the east at the Needlework Street.

Following the urban renewal trends during the reign of Napoleon III in Paris, Montpellier also made Haussmannian adjustments and enlargements to some of its streets. So the Peyrou Street became the Imperial Street in 1864. During the Third Republic the name was changed again to National Street.

Ferdinand Foch was a French general and military theorist who served during World War I. Known for his aggressive military style, Foch became the Allied Commander-in-Chief in late March 1918 in the face of the all-out German spring offensive. He successfully coordinated the French, British and American troops into a coherent whole, stopped the German offensive and launched a war-winning counterattack.

One month after the death of Marshal Foch in 1929, the street was renamed to Foch Street.
Image Courtesy of Wikimedia and Jonaslange.