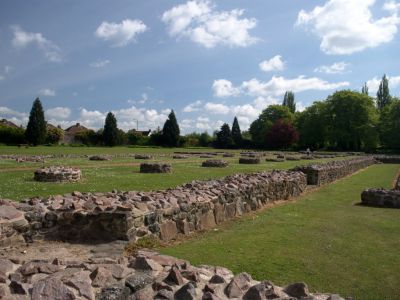 Ruins of the Abbey, Leicester (must see)

Leicester Abbey was built under the patronage of Robert le Bossu, Earl of Leicester. It was founded as a community of Augustinian Canons. The abbey was one of the largest and most influential land owners in Leicestershire, thanks to contributions by important patrons such as the Earl of Winchester, Simon de Montfort, and, finally, the Crown. The abbey is perhaps most famous for its connection to Cardinal Thomas Wolsey, Archbishop of York and Lord Chancellor of England, who was for a time the most powerful man in England, second only to the King. He was buried within the walls of the Abbey church, and today a monument stands on his supposed resting place. In 1613, William Cavendish, the first Earl of Devonshire, acquired the property, and it became known as Cavendish House. It was used as the headquarters of Charles I after his forces occupied the town in late May 1645. The house was burnt down following the royalist defeat at Naseby and never re-built.
Image by NotFromUtrecht on Wikimedia under Creative Commons License.
Sight description based on wikipedia